A flute concert where Maestro Shashank Subramanyam presents a variety of ragas including a  Tyagaraja kriti in Andolika, an unusual ragam

. Shashank also presents Ragam, Tanam Pallavi in Behag and a Ragamalika.  The concert also includes the popular Rama Mantrava Japiso in Jonpuri by Purandaradasa and Vishweshwara in Sindu Bhairavi by Swati Tirunal. The concert ends with an exciting Tillana composed by Shashank himself.

Shashank Subramanyam (was born Oct. 14 1978) widely acknowledged as a legend of the Flute, is a Grammy-nominated renowned exponent of the Bamboo Flute from India and specializes in Indian Classical Music.[1] He is a recipient of the Sangeet Natak Akademi's senior award by Govt. of India bestowed by the Hon. President of India for the year 2017 at an investiture ceremony held at Rashtrapathi Bhavan in New Delhi. He was a child prodigy and began performing from his age of 6 in 1984 and has performed for over three decades. 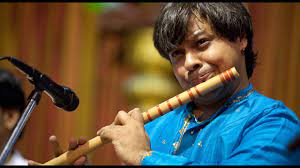 Shashank Subramanyam was born in Rudrapatna, India to Hemalatha and Subramanyam. His forefathers belong to Tirunelveli dist of Tamil Nadu. He was trained in Carnatic music by his father, Palghat K.V. Narayanaswami, and Hindustani music under Pandit Jasraj.[2] Shashank is married to Shirisha, a Bharatanatyam dancer. He had no Gurus for Flute playing and was self taught. Shashank and Shirisha have a daughter Swara and son Samvit and live in Chennai, India.[3]

Shashank performed in public for the first time in 1984 at the age of six. Shashank began performing at the top circuit in 1990 with major performances in Adelaide, Australia, Kuala Lumpur, Malaysia and in Singapore followed by his major performance at Shastri hall in December 1990.[4] His career-defining moment came when the Music Academy invited Shashank, just 12 years old, to perform in the senior most performance slot "SADAS concert" at The Music Academy, Chennai 1 January 1991.

Shashank performs in a wide range of concert environments from the pure Indian classical, Symphonies, Jazz, Films and crossover projects. He has led many ensembles and also has been a guest artist on many famed bands like Remember Shakti, New Jungle Orchestra, Blue Lotus, etc.

The BBC World TV did a documentary on Shashank titled Destination Music in 2006 and the CNN international TV featured Shashank's performance and interview as part of the Travel Logue India show.

Accompanying Shashank on the Violin will be Mysore V. Srikanth. 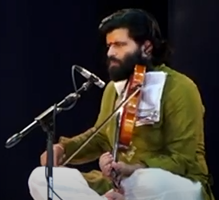 Srikanth have been learning and performing South Indian Classical Music for more than three decades.  He has collaborated with Artistes of other genres and performed in India & North America, Canada, Hong Kong, Singapore, Australia, Bangladesh. He has composed many meditative albums with his virtuoso brother Flute Raman. He has accompanied great legends of Indian classical music like Dr M Balamurali Krishna and Bombay Jayashree. 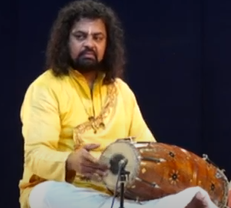 1970; Vizianagaram, Andhra Pradesh).  Born into a family steeped in Carnatic music, Satish Kumar was initiated into learning mridangam at a young age by his mother Smt. Padmavathy, who was a violinist. He performed his first concert at the age of 7. Satish Kumar was trained by three mridangam vidwans from Andhra Pradesh Sree Ramachandramurthy, V Appalaswamy and Vankayala Narasimham.[2]

Satish Kumar has performed alongside many artists including Veena Vidushi Dr. Jayanthi Kumaresh, Dr M. Balamuralikrishna, Ganesh and Kumaresh, Chitraveena N. Ravikiran, Ustad Zakir Hussain, Pandit Jasraj, Flute Maestro Shashank Subramanyam, Sudha Raghunathan, Bombay Jayashri, Aruna Sayeeram, Nithyashree Mahadevan, T. N. Seshagopalan, Sikkil Gurucharan, A. Kanyakumari, Mysore Nagaraj and Mysore Manjunath, Shenkottai Harihara Subramaniam and many more. Over the years, he has evolved a style of his own which blends seamlessly with various instruments and voices, alike. He has been a part of many musical confluences of Classical, Fusion and Jazz genres.[2]

Satish Kumar was one of co-artists in Margazhi Raagam - first ever Carnatic music concert movie. He has also released a CD titled Dimensions - A solo presentation and Dancing Drums - a percussion ensemble presentation.

Satish Kumar was awarded the titles of the Mridanga Naada Mani and Navayuga Nandhi titles.
We have had the pleasure of seeing Satish Kumar perform a few times in Fort Myers.

Sirisha Subramanyam accompanies her husband Shashank on the tambura.
We will see more of Sirisha, as she gives her own dance performance soon!

Watch a preview of the concert here.