Rashmi Agarwal is a versatile In 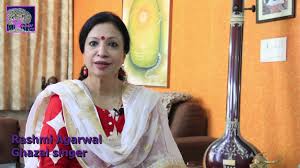 dian singer based in Delhi. Her music is emotive, expressive and soulful. Over the years she has carved out a niche for herself as an accomplished Sufi and Ghazal singer. The beautiful interplay of her crystal clear voice and heart touching compositions are a delight to hear.

Was awarded with the Sambhavna Sammaan 2014 in Delhi for her contribution and achievements in the field of music.

Was invited to perform for The Ethnic World Music Festival, Bali, Indonesia, Nov.2013.
Performed for the Jaipur Sufi Festival of SAARC Writers and Literature at Diggi Palace, Jaipur.

She was awarded the Best Female Singer by Artistaloud.com (Hungama Digital Media) in their 3rd Annual Awards, 2013, for her Sufi song "Ranjha Jogida".

She composed and sang the anthem against corruption written by celebrated Lyricist Prasoon Joshi, for Headlines Today News Channel.

Besides her debut Sufi album Rang De Maula by Mystica Music, she also has a number of audio albums to her credit, namely Songs of Kabir by Osho World , Folk Songs From Uttar Pradesh by Beatofindia.com, Enchanting Chants by Pragnya Music and Deep Electric India by Soultribe Records. Two of her “Singles”, a Ghazal and a Sufi Folk Fusion song were digitally released by ArtistAloud.com. Her latest release is a Ghazal Album, Sentiments, by Red Ribbon. Most of her songs are available for purchase on iTunes.

Rashmi is an empanelled artist of the Indian Council for Cultural Relations(ICCR) for performances abroad. Besides TV and Radio, she has also performed on various national and international forums including the USA, UK etc. and won many a heart with her soulful and power packed performances. Rashmi has an MA in Vocal music from the University of Allahabad. 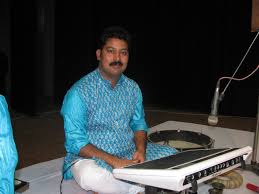 Satish has been in the Music industry since the last 30 years and worked under the guidance of music directors like Shri. Jitendra Pal Sharma and Shri. Guru Hariom Kashyap. He plays many Percussion
instruments like Octopad, Bongo, Congo, Dholak etc. and has performed on various national and international platforms accompanying several reputed artists. 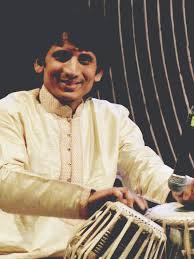 Shantibhushan received his initial Tabla training from Pandit Bulbul Maharaj and presently, learning from Ustad Akram Khan of Ajrara Gharana.
He is a Soloist and Accompanist as well as Tabla Teacher of Banaras and Ajrara Gharana.
He has performed on various national and international platforms accompanying several reputed artists. 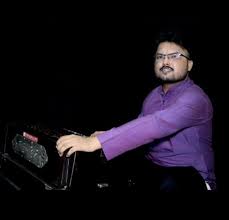 Ashique is a disciple of Pt. L K Pandit. He is a research scholar and young vocalist belonging to Gwalior gharana. He is a graded artist of All India Radio. He has performed on various national and international platforms accompanying several reputed artists. 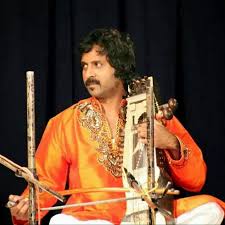 Ghulam Ali is the son of the celebrated musician Ustad Tajuddin Khan sahab. He is a disciple of Ustad Wazir Hussain Khan of Sonipat Panipat gharana and gayeki from Agra gharana. Performed as a soloist and accompanist on various national and international platforms.