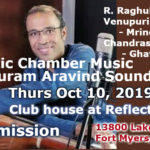 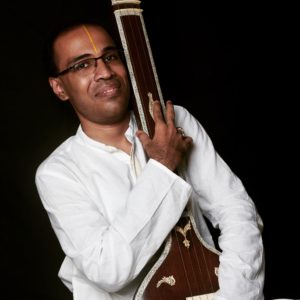 A Carnatic Musician, Soundararajan is a disciple of Sri TN Seshagopalan & S Kasthuri Rangan
Kalyanpuram S Aravind hails from a family of rich vedic and musical heritage of generations which mainly includes Kalyanapuram Sri Veeraraghavachariar and Kalyanapuram Sri Aravamudhachariar, a renowned Harikatha Exponent and musician. Aravind possess music in his gene, which is inherited from his traditional culture.

He started walking in the path of the music voyage as a child of 4 years, holding the hands of the legendary Sangeetha Kalanidhi, Padmabhushan, Madurai Sri T N Seshagopalan, thereby learning every nuances of the musical form imbibing the bhaani, offered from the rich tradition of his guru.

Aravind started rendering krithis of Swami Thyagaraja right from his 6th year, which has now culminated into a matured and confident musician which attracts the rasikas.

The sword of the music, which Aravind carries has been further sharpened and polished by the veteran musician Sri S Kasthuri Rangan, a prime disciple of Sri TNS who carries with him and maintains the bhaani of the TNS school of the impeccable paatantharam.

Soundararajan will be accompanied on the Violin by R. Raghul, Mrindangam Venupuri Srinivas and Ghatam by Chandrasekhara Sharma.

More about the artist